The Land Of Stories Wiki
Register
Don't have an account?
Sign In
Advertisement
in: Institutions, Politics, Fairies,
and 7 more
English 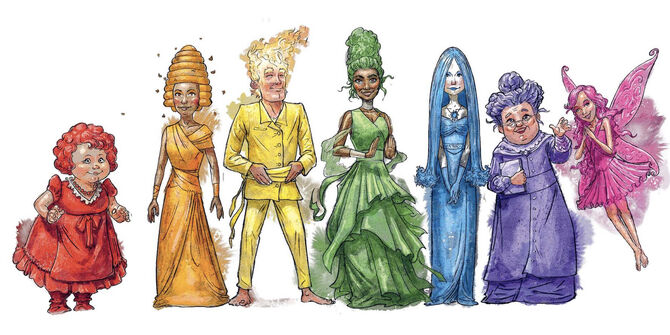 The fairies in the council were some of the most powerful beings in the Land of Stories. After the events the Masked Man succeeded in recruiting a literary army, they were turned to stone and temporarily incapacitated,[1] but later freed by Froggy.[2]

The ten fairies come in different sizes and have different traits and powers, making them unique.

The Fairy Council enforced the law in the Fairy Kingdom. They were described as rather rigid, uncompromising and stern.

An example of their decision-making can be found when Alex and Conner met a young fairy (Trix) who was accused of using magic against another fairy.[3] Though the Fairy Council was sympathetic to Trix's appeal, they were about to banish her from the kingdom anyway ("rules are rules") until Conner intervened. He later accused the Council of focusing on the wrong things, because they didn't know the trolls and goblins were still enslaving people. They took his words to heart, and started focusing on real problems.[4]

They take an active role in fighting against the threats to the Land of Stories like the Enchantress and the Grande Armeé. They remained absent in later events since they had all been turned to stone

They participated in the battle in the Otherworld against the witches and Literary Vilnians.

The Council accused Alex of neglecting her Fairy Godmother duties and spending too much time trying to find the Masked Man. They gave her an ultimatum, which she refused, and they "ungodmothered" her. When the Masked Man and his army arrived in the Land of Stories, the Fairy Palace was destroyed and the members of the Fairy Council were turned to stone;[5] later, they were freed by Froggy with Medusa's tears.[2]

"We are the Fairy Council- if we lose our hope, all hope for the rest of the world is as good as gone."[6]-Fairy Council

"And if you excuse us, we have a kingdom to rebuild and a world to save" -Brystal Evergreen

"They've always thought doing nothing is better than doing something that might be harmful or make them look bad. But that's politics for you."[7]-Mother Goose

Français
Community content is available under CC-BY-SA unless otherwise noted.