General Jacques du Marquis is an original character from the Land of Stories series. He is the main villain of A Grimm Warning and first appears in the Prologue. He is part of the French Grande Armée from the Napoleonic wars (1803-1815).

"For a man with such an intimidating reputation, his physicality was a bit disappointing. He was a short man with large gray eyes and big hands. He wore a large rounded hat that was broader than his shoulders and several badges of honor were displayed on his tiny uniform. He removed his hat and placed it on top of the desk, revealing a perfectly bald head."[1]

General Marquis is described as "one of the most feared generals in the French Empire's Grande Armée".[2] He wears a distinctly musky cologne and has a twitch in his left eye, which he says occurs when he is being lied to.[3]

Though already introduced as a villain with a temper and a mean disposition in the Prologue, in the course of A Grimm Warning, General Marquis is shown to be exceptionally cruel. In Pinocchio Prison, he burns the wooden soldiers who had served as guards of the prison to intimidate (and possibly please) the prisoners.[4] When Conner, Bree, and Emmerich first see the Grande Armée, they witness how General Marquis interrogates a local villager and then has him killed.[5]

As General Marquis travels to the Northern Mountains to visit the Snow Queen, he callously lets his soldiers perish in the cold weather while he himself is wearing a warm coat, and he tries to kill the Masked Man right after getting the dragon egg.[6] Later, when the dragon egg is hatching, he reveals his plan of feeding the villagers to the dragon. He shoots his loyal helpers Capitaine De Lange and Colonel Baton in the foot when they have displeased him, causing them to fall into the pit with the dragon where they are eaten alive, [7] and in the final battle, he tries to convince the Fairy Council to surrender by proposing to execute all of the kingdoms' monarchs.[8]

It is mentioned that he enjoys the fear and helplessness his opponents feel when they see his dragon.[9]

It is implied that his cruel nature comes from a background of being bullied or abused in his childhood- when facing a Mirror of Truth, his reflection is a starving and scared boy with an eye that is swollen shut from a severe beating.[10]

General Marquis reveals to the twins that his goal is to outshine Napoleon and make a name in history for himself.[11] Even though his army is eventually defeated, he refuses to surrender, which leads to his death.

He is the commander of a huge battalion of the French Empire's Grande Armeè.

In 1811, General Marquis has the Brothers Grimm followed and then kidnapped to force them to reveal their sources. He has figured out there is a fairy tale world and wants to conquer it. He and his army follow a map through a portal that takes them 200 years to arrive in the Land of Stories. When they do, he goes to recruit for battle in Pinocchio Prison. There, he meets the Masked Man, who offers to help him. With his help, General Marquis acquires a dragon egg and hatches it. His army attacks the kingdoms and he manages to capture the kings and queens. Although his army is bitterly defeated, he believes he can still win with his dragon, but the Masked Man turns on him and uses the dragon to incinerate him (as the Masked Man had the egg shells in his hand, making the dragon believe he was its "mother").

"You think you know me, but you don't know the first thing about me. You have no idea where I came from, what I came from, or what I had to do to become who I am today."[12]

"There is only room for one man in the history books."[13] 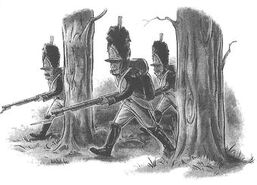 Some of General Marquis's soldiers 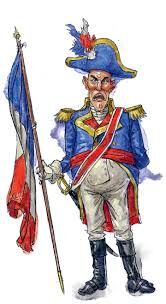 General Marquis
Add a photo to this gallery

Retrieved from "https://thelandofstories.fandom.com/wiki/General_Marquis?oldid=16505"
Community content is available under CC-BY-SA unless otherwise noted.