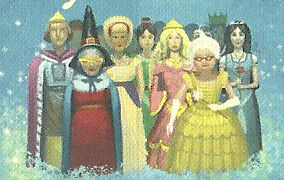 The Happily Ever After Assembly was an organization created for the respect of the treaty signed by all the kings and queens in order that all the kingdoms could live in peace and prosperity. It was founded by the former Fairy Godmother in the Golden Age and abolished by Alex in A Grimm Warning. She founded the Happily Forever After Assembly to replace it, and invited the Elf Empire and the Troblins to join as well.[1]

The Happily Ever After Assembly was composed of the monarchs and leaders of the different kingdoms in The Land Of Stories :

The rulers of the Elf Empire and the Troll and Goblin Territory were not "invited" to the assembly, causing tension between them and the Assembly.[2]

"Sounds like our United Nations," Alex whispered to Conner.[3]

Retrieved from "https://thelandofstories.fandom.com/wiki/Happily_Ever_After_Assembly?oldid=11981"
Community content is available under CC-BY-SA unless otherwise noted.