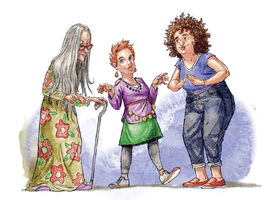 The Sisters Grimm, (also called the Sisterhood or simply the Sisters), are original characters from The Land of Stories series. They first appear in Beyond the Kingdoms. They are a group of women who are all distantly related to Wilhelm Grimm. They monitor the Portals and "magical phenomena" in the Otherworld. They live in a house in Willow Grove, Connecticut, on Mystic Lane 1729.

The Sisterhood was founded by Maria Grimm, Cornelia's third-great-grandmother, in 1852. She studied history and magical phenomena and gathered that the magical creatures in myths and legends of ancient civilizations all really existed- and came from the fairytale world. She found out that a portal to the Land of Stories magically opened for a brief moment once a month when the two worlds collided, and that these creatures were able to come into the Otherworld. She and the Sisters took it upon themselves to make sure no harm came to anyone or anything during these magical events. They used charts and diagrams to calculate when and where the portals would open, and guided whatever came through the portal back into it, or kept it safe until the next portal opened.

Every now and then, magical creatures who accidentally passed through the portal managed to escape and remained in the Otherworld (the Loch Ness Monster, Sasquatches/Yetis).

The portals stopped appearing fifteen years ago, when the speeds at which the worlds were moving synchronized because of the birth of Alex and Conner.[1]

The Sisterhood in Beyond the Kingdoms

In search of her ancestry, Bree goes to visit the Sisters and finds out she is related to them. They know about the story of the Grande Armée, and Bree fills them in on the events that occurred in the Land of Stories when the Armée came out of the portal. In turn, they tell her about the sisterhood and show her the guesthouse, in which they keep their diagrams to predict the portal openings, and several findings of magical activity (a mermaid skeleton, several fairy skeletons)

They discovered that a portal will open six months from now, in New York City, and it will stay open much longer.

"We've used the most powerful force of our world to predict the locations of the magical occurrence," Cornelia said. "Science!"[2]

The logo in the top right corner is fan art.

Retrieved from "https://thelandofstories.fandom.com/wiki/Sisters_Grimm?oldid=16629"
Community content is available under CC-BY-SA unless otherwise noted.